“More roles must be written for people with intellectual disabilities!”

Our Inclusion Heroine in February is Aimée Richardson.

Aimée Richardson playing the flute during a performance

She plays six instruments, has done voice over work for a famous Irish cartoon and is part of a group competing at a popular talent show on TV: Aimée Richardson from Ireland has an impressive CV, and her work certainly is an example for what people with intellectual disabilities can achieve when they get fully included in the field of their choice. We asked Aimée about her experiences in the entertainment industry, her trips to Moscow and St. Petersburg for the International Disability Film Festival – and about what needs to change so more people with disabilities can follow in her footsteps!

What are the instruments you play?

How did you get interested in playing all these instruments?

I’ve always loved music– right from the first xylophone that I started with when I was very small. Playing the xylophone developed my musical ear and that was useful for learning other instruments.

My mum taught me the tin whistle and from there on, I got more involved with Traditional Irish music. I’ve become a keen musician and music is a big part of my life: I’ve played with popular Traditional Irish groups and create my own compositions.

I love each one for its different sound.

The harp is beautiful … it’s difficult to play but I’m keen to learn.
I’m most fluent with the tin-whistle and I love it: It’s a small instrument, I can play it anywhere, but it has a powerful sound. It can easily get a theatre full of people hopping around!

Together with the Dublin Ukulele Collective, you took part in the talent show “Ireland’s Got Talent”. How did you like the experience?

It was exciting! For me it was the first time taking part in a competition. We always enjoyed dressing up brightly for our performances, we had our hair and make-up done – everybody loved it! But it was also hard work, and we spent a lot of time with rehearsals and practising the chords and the lyrics. It was a big thrill to learn that we got through to the next stage of Ireland’s Got Talent – this part will now be televised! 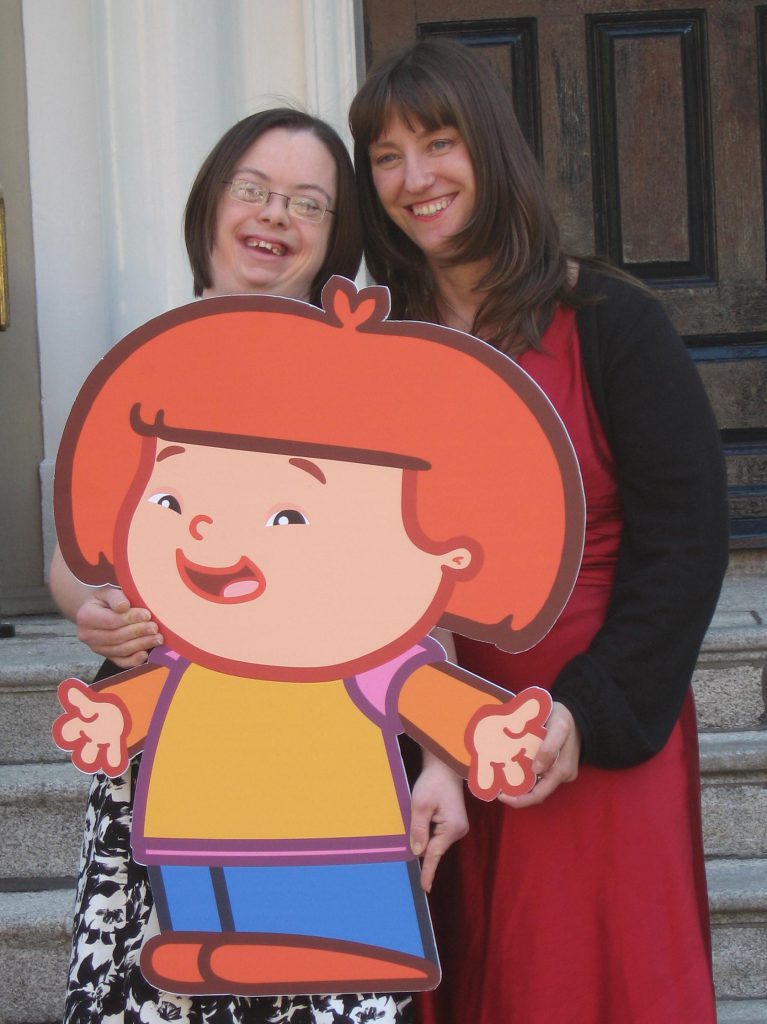 Aimee Richardson together with Lindsey Sedgewick, the writer who created Punky

You did voice over work for the TV series Punky, the first cartoon with a lead character that has Down Syndrome. What was it like when the TV show became so famous in Ireland?
It was great! I was asked to do a lot of interviews for radio, TV and newspapers. Twice I was invited on a popular Saturday night talk show. Afterwards some people even recognized me in the street. When Punky was nominated for an award at the IFTAs (Irish Film and Television Awards), I was invited to the ceremony together with the director and the screenplay writer. It was very glamorous, with a red carpet and all. I was lucky enough to meet a lot of TV and movie stars!

You went twice to the International Disability Film Festival, organised by our Russian member Perspektiva …

I really enjoyed watching all kinds of films from all over the world. And I made a lot of new friends!

“Punky” was shown to an audience of Russian children, and they were so enthusiastic… I answered some of their questions afterwards.

In Moscow, “Punky” was awarded the prize for the “Best Children’s Film”. And I was invited to play the whistle and the flute at the closing ceremony!

You are currently studying at the Blue Diamond Drama Academy, an initiative that aims to include adults with learning disabilities within mainstream art projects. …

… what do you learn at the Academy?

I learn many different things: how to properly warm up your voice, how to recite monologues, dancing and so on, but we also study classical playwrights like Shakespeare. This course is specifically aimed at students with intellectual disabilities, and as it happens we all have Down Syndrome. Currently I’m working on pantomime and slapstick comedy. We are also writing and devising a play based on our personal experiences in relationships!

You have a lot of experience in the film industry. What do you think needs to change so more people with intellectual disabilities can be actors? 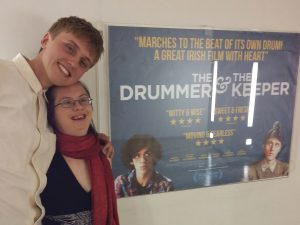 What are your plans for the future?

I would like to become a permanent part of a full-time theatre company to develop my acting and maybe some directing. Perhaps I will find some way to combine acting with my musical talents. I recently had a small part in a brilliant movie – “The Drummer & The Keeper”. From that experience, I’d love to do more acting in front of camera. Maybe there’ll also be more voice-over work!

As a musician, I would love to have a chance to perform with professional traditional Irish musicians. I’ve played whistle duets with Paddy Moloney and some of my other favourites are Sharon Shannon, Martin Hayes, Mairtín O’Connor, Liam O’Maonlai and many others! I would also be thrilled to hear them play some of my own compositions!

See here some videos of Aimée Richardson playing her instruments: