Fashion designer with Down syndrome heading to Hollywood gift lounge

Following a difficult health battle this winter, a young Nova Scotia fashion designer with Down syndrome can look forward to the rest of her year knowing it’ll be sweetened with the kind of exposure any artist might dream of.

Marie Webb’s Halifax studio is draped with her eye-popping, colourful dresses, scarves and shawls. They’re a sample of what Hollywood will see this September, when Webb will be a part of a pre-Emmy Awards gifting lounge in Los Angeles.

Webb, 27, will appear at the lounge in advance of the award show, wearing her trademark vibrant fashions, offering up pocket squares she’s created to the nominated actors and actresses.

At her sunny north-end Halifax space at Wonder’neath Open Studio, where Webb is one of eight artists in residence, she plans, draws, colours and felts templates for her Lemonade Stand Designs brand. Her fashion designs are sold on online sites like Etsy and Shopify.

Webb’s mother, Renee Forrestall, a well-known painter and art instructor, sits across from her. She scans designs and prepares them in Photoshop. She then sends them to a manufacturer in Montreal where the templates are applied to silks and satins. 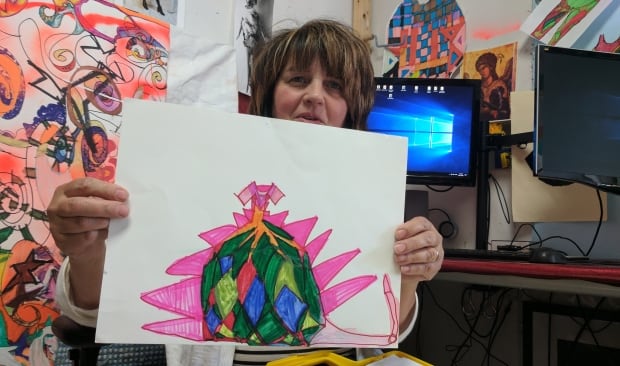 Renee Forrestall holds up one of many dress designs created by her daughter. (David Irish/CBC)

« Marie is very optimistic and very positive and always look at the positive side. It’s just the way she is. I think that comes out in her work that’s colourful, joyful, playful, » Forrestall said.

A marketing company organizing a pre-Emmy gift suite noticed Webb’s work online and invited her to bring her designs to a suite where companies give away their products to celebrities and the press.

It won’t be Webb’s first celebrity-studded event. She went to the Toronto International Film Festival last year. But other invitations to the Golden Globes and Cannes Film Festival were sidelined by the diagnosis of a serious illness. Forrestall disclosed the details of the illness, but CBC News has agreed to keep them private.

Webb was hospitalized for a month this winter.

« We’d been cruising along fairly happily, blissfully unaware that Marie was actually quite ill. It did hit us like a tonne a bricks and we weren’t sure, when we were in there, whether we were coming out, » Forrestall said.

During her stay, Webb maintained that determination and smile, designing dresses from her hospital bed. 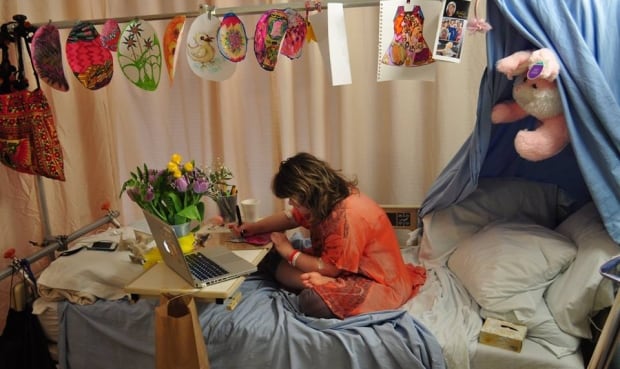 Webb worked away in her hospital bed during her month-long stay. (Submitted by Renee Forrestall)

« She was drawing things and I was putting them up on the walls and all the nurses were coming in, » said Forrestall. « She made it a party room. »

Read this update of Mary Webb with stars at the pre-Emmy Awards on CBC website. Here are the pics:

Marie Webb poses with actress Susan Sarandon, who was nominated for best actress in a limited series at the 2017 Emmys. (DPA Lounge/Submitted by Renee Forrestall)

Webb and Nigel Lythgoe, creator and judge of So You Think You Can Dance. (DPA Lounge/Submitted by Renee Forrestall)