At this Toronto coffee shop, baristas with developmental disabilities call the (espresso) shots

That’s the slogan you’ll see on your barista’s T-shirt if you head over to the Coffee Shed at Surrey Place Centre, a building on the University of Toronto campus.

Turns out, it’s not an overstatement. At the Coffee Shed, all of the baristas have developmental disabilities. And, thanks to an ingenious social enterprise model, they also run the place.

At the Coffee Shed, all of the baristas are developmentally disabled. And, thanks to an ingenious social enterprise model, they also run the place.

I know the manager of the Coffee Shed, Gerald Fantone, who also acts as the barista’s job coach and mentor. When managing this kiosk became his day job, I started noticing something about his Facebook feed. Suddenly it was full of photos of his employees… doing things together. Making coffee, for sure. But also just out and about. Eating ice cream. Going to the Toronto Exhibition. Having a blast, basically.

The Coffee Shed team is just that: a team. They get along. They’re like a second family to one another. Every manager’s dream.

So I decided to pay a visit to the Coffee Shed at about 11 am on a weekday, just when the caffeine withdrawal is starting to kick in from my 8 am fix, to see them in action. 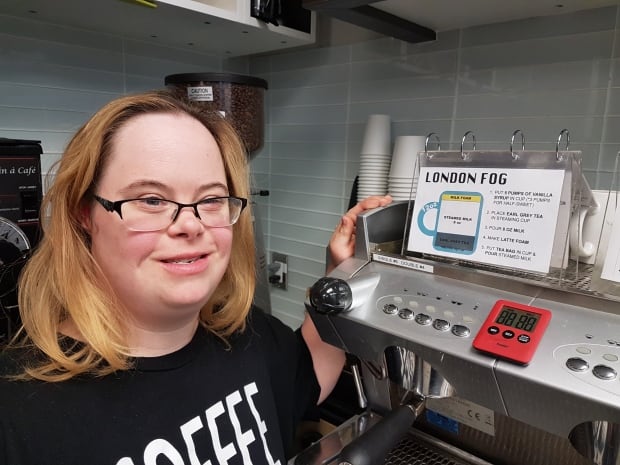 Coffee Shed partner Rachel Boardman about to make her favourite drink, the London Fog. Each specialty drink has its own laminated instruction card so the baristas can always make a perfect brew.

The first thing I notice is that it’s not really a shed, per se. It’s more like a closet. And there are seven people behind the counter — refilling supplies, counting change, cleaning up and making coffee after coffee. They’re in some kind of deep co-operation zone, moving around each other with a wordless understanding. 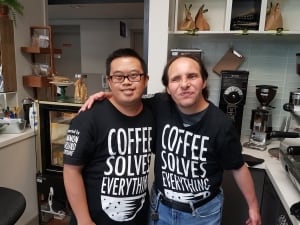 The first person I meet is Paul Wong, whose 14 years at the Coffee Shed give him a calm assurance that rubs off on everyone around him. Paul is a kind of coffee-shop sensei: when Alexander Saab is mixing together the espresso and chocolate for my mocha, Paul starts steaming the milk. When Rachel Boardman pauses at the cash register, Paul comes over and helps her find the right button.

The Coffee Shed is part of the Common Ground Co-operative, which operates three such coffee kiosks in Toronto, a bakery called Lemon and Allspice that supplies the Coffee Sheds with their sweet treats, and a newly added toy-sanitization company, which sanitizes toys used in children’s behavioural therapy programs. The goal is for adults with developmental disabilities to call the shots and create their own workplace community: after training and apprenticing, staff members can get voted in as a « partner. » They draw an income and run the place as a business partnership.