To read on The Guardian: 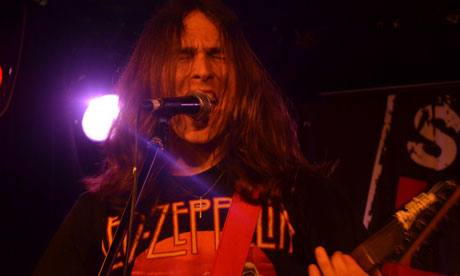 The boon of Gig Buddies. ‘It means I can go out more. I have opportunities I’ve never had before, like going to Glastonbury,’ said David, 27. Photograph: Gig Buddies

Gig Buddies, an innovative Sussex project, is giving people with learning disabilities the chance to go to music gigs in the evenings. Rather than miss out on music – either completely because of lack of a support worker, or partially because that support finishes early – people with learning disabilities can now stay until the end of a show with their trained « gig buddy » in tow.

Paul Richards, 43, former bass player for Heavy Load which includes members with learning difficulties, is the founder. « We found it frustrating when some of our fans had to leave gigs early, » he explained. « The whole idea of this was to do something about that. »

Richards started an awareness campaign, Stay Up Late, in 2006 and the organisation became a registered charity in December 2011. Gig Buddies is one result. « Heavy Load had been 15 years of anarchy and mayhem. In the week we quit, I got a letter saying we’d won funding for the Gig Buddies project. » he said.

The charity received a £2,000 award from City Camp, and together with £5,000 from Southdown Housing Association, £11,300 from Brighton and Hove city council and £9,000 from the Sussex community, Gig Buddies is now firmly established.

The launch event at Brighton’s Komedia in March was a sell-out. Musicians with learning disabilities played thanks to training through Carousel, a group which inspires people to achieve their artistic ambitions.

Sarah Walpole, 35, an artist from Hove who went along, said: « Initially I’d gone along to see one of the bands, but then I looked more into it and now I’ve signed up for the training. If I was young with a disability, I’d want to be out. Different people need different things. Some are vulnerable; some independent. If you’re vulnerable and your parents can’t be there looking after you, this works. It’s empowering and a bit like dating without the love. »

David, 27, who has a learning disability, agreed: « For me, it means I can go out more, make some new friends and have opportunities I’ve never had before, like going to Glastonbury. I got involved through Stay Up Late – the person I live with did discos for them. I’m going to Glastonbury with my gig buddy, who I’m meeting next week. »

As well as being a keen metal fan, David takes rock photographs and took the pictures for the Gig Buddies launch night.

Gig Buddies will have a presence at this year’s Glastonbury in a pilot scheme with two pairs of buddies going along to work with the charity Attitude is Everything which looks to improve deaf and disabled people’s access to live music.

There are 30 volunteers and rising on the Gig Buddies roster. Project manager, Madeline Denny, 25, said: ?Only two of those volunteers have a friend with a learning disability, so you see it’s a kind of silent segregation. People feel isolated and don’t have the opportunity to meet others.

« This is a learning disabled-led project looking to change that. We’re setting up an advisory panel of people with learning disabilities, who can help to plan and guide it with their ideas. It’s about an inclusive society which is good for everyone. »

A typical volunteer is someone who goes to gigs regularly, is kind and happy to help others to do the same. Previous relevant work experience isn’t a requirement. The training is free, consisting of two half days with sessions on disability rights, the project’s history, and dealing with emergency situations.

Two gigs a year is the plan – the next is along the coast in Hastings. In early September, an outdoor festival is being mooted.

Richards added: « We’re working out ways how to make this self-funded by turning it into a social franchise or getting sponsorship. We don’t want it to be reliant on grant funding and are hoping it takes on a life of its own. »

Other cities that have already shown an interest include Bradford, London, Bristol and Belfast.