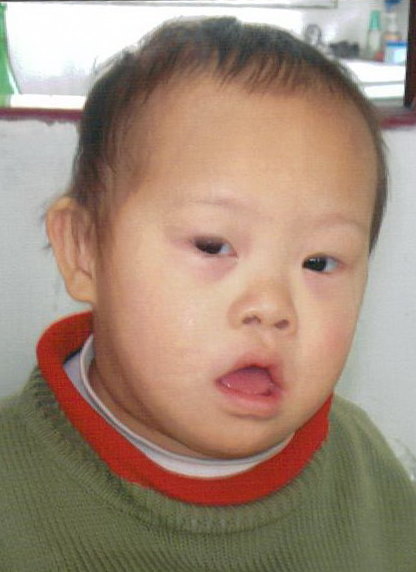 What is the situation of children with intellectual disability in Cambodia? Here is a study by Jennifer Carter: A Cooperative Approach to Service Provision for Children with Intellectual Disabilities in Cambodia (2008).

I have excerpted a section of the Cultural Context, but all the document is much informative.

Cambodia is predominantly a Buddhist country, with about 85% of the population identifying themselves as Theravada Buddhists. The remaining 15% adhere to Islam, Christianity, Animism, and Hinduism.

A good deal has been written on the Buddhist perception of disability, but very little in-depth research produced on the subject. Conclusions on the issue of Buddhism and disability tend to be solely based on a belief in karma. Put most simply, it has been argued that Khmer people believe that disability is a result of sin in a past life on the part of the person with the disability or his or her family. A person with a disability is bad luck, someone who should be “left to their fate,” made to pay their karmic debt through a difficult life. However, this issue is in reality much more complex than it seems. It is much more constructive to accept, as Gartrell argues, that “reducing Khmer explanatory models to the Theravada Buddhist notion of karma is a gross simplification of the eclectic and changing rationales of disability causation held by villagers.”

The Khmer world view is complex, influenced by centuries of cultural exchange, shaped by outside forces as well as traditional sources, and above all, dynamic. The seat of consciousness and feelings lies within the jet, or heart- mind. When one is depressed, he or she is plouw jet (literally, road to the heart). When one is kind, light-hearted, or happy, he or she is sobay jet (happy heart). When one is sad, or facing a difficult challenge, he or she is peebahk jet (difficult heart). In Khmer culture, the body and the mind are linked. To have a weak (or disabled) body may mean that one also has a weak mind. For this reason, persons with disabilities may experience discrimination due to physical difference as well as a perceived mental handicap. Furthermore, Khmer culture tends to embrace a strong social structure, based around the family unit. Even outside the family, familial classifiers are commonly used. One’s ability to positively contribute to the livelihood and wellbeing of one’s family is of the utmost importance. Inability to do so, regardless of the reason, upsets the accepted order and causes friction within the family and society. Persons with disabilities who cannot contribute to the family are a burden, a symbol of disorder or “disharmony in social relations and relations with ancestors, spirits, and karmic debt.

Khmer culture is also a culture of giving. It is believed that when one gives something, one gets something in return. According to O’Leary, there is a strong “patron-client” system in place, which requires that the wealthy shower their riches down the societal ladder in order to support those beneath them. This is illustrated in the Khmer proverb, ‘Rich take care of the poor as the sarong surrounds the body.’ There is an established, widely accepted “pecking order.” It has been said that to be Khmer is to be hierarchically ordered in society. Due to the Buddhist belief that everyone has a different amount of karmic merit, equality is essentially impossible. Those who hold a higher position have the responsibility of supporting those beneath them, and in doing so they accrue karmic merit. In terms of disability, this may be used as a rationale as to why persons with disabilities beg. They beg because it is expected from them. A wealthy person will give the beggar money and thus accrue merit from a good deed. The wealthy person has annut (pity or compassion) for the disabled person, and so helps him by giving him money. Yet this relationship only further marginalizes the person with a disability, forcing him to maintain his low status and to rely on the pity of others, effectively commodifying his situation into a currency of merit.

Khmer beliefs toward disability are complex, and an easy explanation for discrimination toward persons with disabilities hard to come by. There are a number of factors at play, including a ubiquitous social hierarchy, karmic merit, a blurred distinction between the mind and the body, as well as a tradition of pity. Discrimination toward persons with disabilities remains a problem in Cambodia, despite important strides. It is still a requirement that civil servants be “able-bodied.” Persons with disabilities are rarely seen at religious ceremonies, as they symbolize karmic debt. Few public places are handicap accessible, even in Phnom Penh. With respect to children with intellectual disabilities, ignorance and discrimination is widespread. This discrimination stretches far outside the community, impacting decisions on a national and international level, dictating the allocation of services within government and non-governmental sectors.

NGO staff will tell you that there is “big, big discrimination” toward children with intellectual disabilities, and that “discrimination is the habit of the Cambodian people.” Parents relay horrifying stories of suggested euthanasia by “friends” and neighbors, or conversely tell you that “there is no discrimination in the community” despite the fact that they themselves do not include the child in family or community life. Children will share experiences of being tormented and laughed at. Testimonies from service providers and local authorities suggest that the reason for this widespread discrimination is not karma but rather a lack of understanding.  Read all.