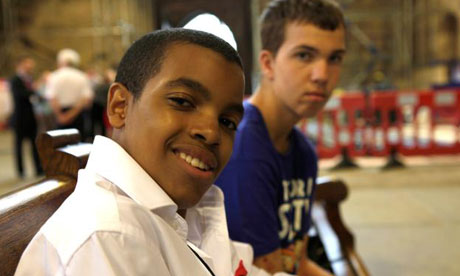 Amal Etienne and Glen Thomas are buzzing with enthusiasm about the charity Mencap’s « Changemakers » project for young people with learning disabilities. They have been a part of it for just over six months and, first and foremost, they say it has helped them feel more independent.

« I don’t want to be like a little child and have to do everything with mum, » Etienne explains. « We went to the House of Commons, House of Lords and Whitehall, » says Thomas. « We did a talk about Changemakers. We talked about Mencap and I told everyone what we did. »

The 16- and 17-year-old from Redbridge in Greater London hadn’t met before the scheme started but have become firm friends since. « We made lots of new friends. It was great, » Etienne says. His mother Jacqui sums up the experience for her son: « He just grew in confidence. It really boosted him to be listened to. Seeing him now he’s like a new child. He’s speaking more. This project made a real difference. »

Making a difference to the lives of young people with learning disabilities is exactly what Mencap intended according to its national strategic lead for children and young people, Elizabeth Archer. « Of all the projects I have been involved with, this is the one I’m proudest of, » Archer says. She explains that what was initially inspired by a single project – « Me Too » in Dudley, where young people actively engaged with local commissioners about the kinds of services and support they required – blossomed into a network of 53 groups in towns and cities across England.

« We knew ‘Me Too’ increased the participants’ confidence but we wanted to see how we could replicate the progress elsewhere. »

With the help of some funding from the Social Action Fund, the charity rolled out Changemakers in 2012 with a number of key objectives. The first and perhaps central one was asking young people between 13 and 25 what they thought needed to change in their communities to improve their lives and increase inclusion but also to find ways they could help make that happen.

The range of initiatives and activities the groups have engaged in since the launch is diverse. First of all the young people attended workshops to help them understand their rights and to discuss how they might make an impact on the attitudes of other people, including those in power. Each group devised their own community volunteering efforts to achieve their goals. For example, in Redbridge where Etienne and Thomas participated, in an effort to increase the visibility in the community of people with learning disabilities the group linked up with the Co-op and spent time in stores talking to local people as they did their shopping. They also campaigned successfully to save a short breaks summer scheme.

In Kidderminster one group helped set up a public safety scheme, « Safe Places », where, with the help of local police and businesses, areas were designated that vulnerable people could go to if they felt threatened. Across the 53 groups volunteering opportunities were also explored so the young people could use the skills acquired during Changemakers to continue to make an impact.

Two other aspects of the project were important to drive it forward, Archer says. One was seeing if a « model » could be established that would survive the original scheme now that the funding has finished – « We are working to make that happen ». The other was making sure local commissioners were better informed about meeting the needs of young people with learning disabilities as a direct result. To this end, Mencap has produced « best practice » guidance for commissioners, charities, schools and local groups in the hope that it will encourage on-going engagement with young people.

The overall outcomes from the two-year scheme, which comes to an end this month, indicate significant changes in the lives of the 937 young people involved. An evaluation found that 71% of young people with a learning disability felt more welcome in their communities following the project. The evaluation also shows that the young people are more likely to volunteer, are more confident, and believe their ability to work as part of a team has improved.

Archer believes the outcomes have been far beyond what was initially anticipated. She says Changemakers has become a conduit for youngsters to put the issues that are important to them forward, not only to other people in their communities but to decisionmakers who affect their lives, from teachers to service commissioners. And crucially, she adds, it has meant young people vocalising their biggest priorities.

For instance, one of the problems that all 53 groups brought up was bullying and, bearing in mind the prevalence of harassment and hate crime faced by disabled people across society, Archer says it proves once again why listening to young people is imperative. « Every single group brought up bullying and discrimination as an issue, » Archer says. « If we can find ways to help them to campaign on the issues that most matter, then that is a good thing. »