To read on Daily Press: 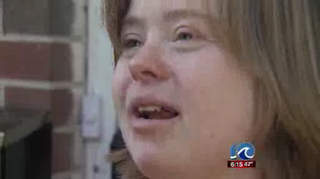 ‘Justice for Jenny’ Down syndrome guardianship case headed for trial

NEWPORT NEWS — Friends of Margaret « Jenny » Hatch — a 28-year-old with Down syndrome who is the subject of a contested guardianship case — on Thursday were permitted by a judge to intervene in the case, giving them a chance to win guardianship or argue that Hatch does not need a guardian.

Hatch was before Newport News Circuit Court Judge David Pugh, who ruled on a number of motions in the case.

But the friends, Hampton couple Jim Talbert and Kelly Morris, said they were disappointed that Pugh also granted temporary guardianship to Hatch’s mother and stepfather, Julia and Richard Ross.

Pugh agreed to allow JFS to exit the guardianship case before granting the Rosses temporary guardianship.

« No! » Hatch shouted as Pugh made the decision. Pugh cleared the courtroom after additional outbursts by Morris and Talbert and gasps from the audience. Several wore « Justice for Jenny » t-shirts, an advocacy group started by Talbert and Morris.

Julia Ross declined to comment to the Daily Press. Richard Ross emphasized that it was a temporary decision.

The case could now go to trial, and a trial date is set for May 1, said Hatch’s attorney Robert Brown. The central issue that has yet to be determined is the extent to which Hatch can care for herself, and whether she needs a guardian or a group home. Hatch had been living semi-independently, including at one point for more than a month with Talbert and Morris in 2012. Talbert and Morris now have legal standing in the case to present arguments and evidence.

Meanwhile, Hatch and her mother may be estranged, according to court documents.

During Thursday’s court hearing, Hatch hugged Morris and Talbert and made frequent eye contact, but did not appear to acknowledge her mother, who was on the opposite side of the courtroom.

Clara Swanson, Hatch’s guardian ad lightem, who is appointed by the court to represent the best outcome for a mentally compromised client, said that Jewish Family Service was initially chosen as a neutral party for temporary guardianship, but the Rosses were the second-best choice. Swanson testified that Hatch has consistently said she desires to live with Talbert and Morris, but in her opinion it wouldn’t be the best living situation for Hatch. Swanson said she believes Hatch would become more distant from the Rosses if she were allowed to live with Morris and Talbert.

Pugh noted during court proceedings that the goal is to do what’s best for Hatch.

But Ken Falkenstein, president of the Down Syndrome Association of Hampton Roads, said that while the association is not taking a stance in the legal case, he would like to see Hatch living in the least restrictive environment possible.

« Jenny Hatch is a 28-year-old adult who happens to have Down syndrome. She still has rights, and as much as possible we want her rights, dignity and her wishes to be honored, » Falkenstein said.